Augustus Gloop falling face first into a chocolate river? Classic. “The snozzberries taste like snozzberries?” An immortal line. And don’t forget Veruca Salt’s remarkably bratty tirades about her desire for a golden goose egg. Plus, a bevy of fictitious confections that make the kid in me salivate to this day.

Chief among these treats, to me, was always Fizzy Lifting Drink. This masterful concoction was filled with enough carbonation to make one levitate, but was deemed too powerful for public consumption. Of course, that didn’t stop Charlie Bucket and his Grandpa Joe from swiping a sip and floating into impeding peril in the form of an exhaust fan in the factory’s ceiling. Only some conveniently-timed flatulence brought the pair back to earth, where they later faced Wonka’s faux wrath as punishment for their transgressions. Good times.

What does this trip down memory lane have to do with disc golf, you ask?

Well, it seems the masterminds at MVP Disc Sports have stolen some Fizzy Lifting Drink themselves and injected it into their newest plastic release.

Fortunately, this iteration is ready for public consumption, and it debuts in the form of the Fission Volt.

Fission plastic, MVP’s newest offering, is the brand’s take on the microbubble technology that other brands have featured as a means to bring their discs into lower weight classes. Noodle arms generally delight over these releases, as the lighter weights make these discs easier to get up to speed and, as a result, fly as intended.

MVP, though, has upped the ante with Fission.

By making the core of MVP’s signature two-piece discs “ultralight,” the company says it has produced “an even higher GYRO™ overmold density relative to the core.” In essence, Fission discs should be more gyroscopic than their common counterparts, since there is more weight pushed to the edge of the disc than before. Flights should hold their line for longer before fading, while still being light enough to throw with ease.

It all sounds great, but no doubt there will be skeptics – myself included.

Having dabbled in plenty of 150-class discs over the years – as well as giving competing companies’ air-infused plastics a shot – increased stability and line-holding seem to be the exception, not the rule. The discs have all been easier to throw, to be sure, but with that ease of throwing came less reliable flights. It was a trade-off you just had to live with.

I can say with confidence that MVP’s claims about Fission plastic hold true. And the Volt is the perfect mold to put these claims on display.

For the uninitiated, the Volt was the first driver MVP released. Clocking in around the speed nine range, it is known for being a stable-to-overstable disc out of the box, wearing in to become a work of art fit to shape multiple lines.

The only downside to the mold? Over time it became increasingly difficult to find in weights below 170 grams, and a heavy stable-to-overstable disc wasn’t very friendly to this noodle arm. As a result, I moved on from the Volt, because I couldn’t consistently make it work the magic of which I knew it was capable.

So when MVP announced that Fission would bring the Volt down to weights as low as 155 grams – with the same stability and control as heavy versions of the mold – I couldn’t wait to get my hands on one.

Luckily, MVP was kind enough to send me not only one, but six Fission Volts, ranging in weights from 155 to 164 grams. I took two of those out for testing, and have saved the rest for the loyal readers of Noodle Arm Disc Golf to enjoy (details below). 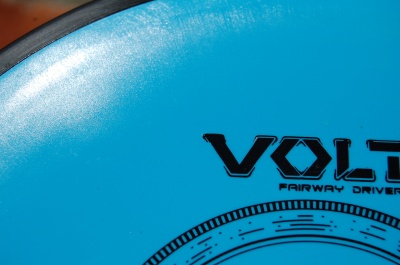 The Fission Volt shows its bubbles in the form of linear striations where the core and overmold meet.

Before throwing, though, I had to give this new plastic a thorough, Westminster Kennel Club dog show-style inspection.

OK, yes, the bubbles are there. You can see just the faintest evidence of their existence near the edge of the core, right where it meets the overmold. They have the look of linear striations more than bubbles, and you can really only notice them when the light hits the disc just right. Feel-wise, the bubbles give just a hint of slickness to the normally tacky Neutron plastic, but the difference is negligible at best. If you gave me a regular Neutron disc and a Fission disc in a blind test, I’d struggle to pick which is which.

Beyond the bubbles, though, I really just wanted to get out and throw these new Volts – and put them to the test in windy conditions. So, I headed out to the local soccer field, which is conveniently located in a park that sits on a hill about eight miles off the Pacific Ocean. In the afternoon, the onshore flow kicks up some steady breezes, so I brought out the two Fission Volts and a Dynamic Discs Air Escape to do some comparison throwing.

In a tailwind, I noticed immediately that the Fission Volts got pushed up and down a little, but their overstable lines stayed true. The Escape also seemed to waver a bit vertically, so I chalked this up to the lighter plastic and tackled the headwinds.

And that is where the Fission Volt truly made its mark.

(Disclaimer: I’m not a human anemometer, but I would rate these headwinds as “moderate” by Southern California standards. They are probably gentle breezes in the Midwest, but here they are enough to give me pause and make me think about what I am going to throw. Obviously, they weren’t making me reach for a massively overstable driver, but I wasn’t going to be throwing a Roadrunner, either.)

Given a touch of hyzer, the Fission Volts would both flip to flat and ride a laser-straight line to the end of its flight, settling down with a mellow forward fade. Thrown flat, the disc would track left (on a left-handed backhand throw) just a bit, but never flip over. Given a healthy hyzer, it would keep that line with integrity.

The Air Escape, on the other hand, was not as reliable. On the same flip-to-flat lines, it would drift off of its course and end up left of my aim. It also turned all the way over when thrown flat, but did make up for some of its misgivings with a bit more distance than the Volts.

Still, which is more important in the wind: accuracy, or distance? You make the call for yourself, but I’m generally leaning accuracy, and as a result I’m reaching for the Volt.

What about MVP’s claim that pushing more weight to the edge of the disc, as the company has done with Fission, results in lines that hold longer, like some kind of Everlasting Gobstopper of Frisbee? One need only throw a Fission Volt back-to-back with one of MVP’s new Plasma Volts to see the difference in action.

The 164-gram Fission Volt I used as a tester holds a long, straight flight on an easy toss for about 85 percent of its flight before fading out. A 169-gram Plasma Volt – which is heavier, yes, but also sports a lower parting line height, which generally indicates a disc is more understable – holds that same straight flight for closer to 70 percent of the flight before fading. It sounds like a subtle difference, but it is beyond noticeable in the air.

And it’s why, out of all the candy the Wonkalicious crew at MVP provided me for taste testing, the Fission Volt has proven to be my favorite. 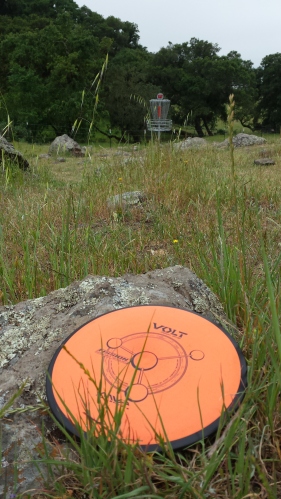 On the course, it is a reliable workhorse in an easy-to-throw package. It absolutely crushes a high, gliding hyzer line, or holds an anhyzer route just long enough to make you think it’s not going to come back.

Where I love it the most, though, is for shots with danger on the left where I know I can’t afford a disc turning over. A recent road trip to Northern California found me faced with two standout lines of this type, and it just felt natural to reach for my 155-gram Fission Volt.

The first was at the new Brooktrails course in Willits. Working its way through mature redwoods, the layout sits on a golf course, which means the greens are out-of-bounds. Hole 1 is just under 300 feet long, with the basket tucked behind some trees and to the right of the green. Throw something that won’t fade, and you’re landing in forbidden territory. Too overstable, and you fade out early and hit the trees protecting the basket.

Throw the Fission Volt, and ride a nice, straight-to-fade shot to park you for a birdie.

The second was at Taylor Mountain Disc Golf Course in Santa Rosa. Hole 12 is a 351-foot, slightly downhill shot that sports a fence line to the left of the tee. With a slight headwind, it makes for a tricky drive for a lefty, as it’s easy to turn one over and end up O.B. But, using the same slight hyzer as in my field testing, the Fission Volt made like Wonka’s glass elevator and rocketed on a straight line to land about 25 feet out from the pin.

Shots like those are what make me keep reaching for the Fission Volt and unlocking more of its potential with each throw. It holds all of the great qualities of a maximum weight version of the disc, but it is delivered in a manner that makes it accessible to those who either can’t handle heavy discs or prefer lighter weights.

We’ve got a golden ticket, and its name is Fission. Gobble it up like candy.

Connect with MVP Disc Sports to learn more about Fission and keep up with future releases: